LATEST UPDATES FOR THE WEEK OF 21-28 FEBRUARY

The outbreak of COVID-19 has now reached a global dimension as it has seen a significant increase in cases outside of China over the last week, with significant local outbreaks reported in South Korea, Japan, Iran and Italy.

Defer non-essential travel to China and Iran until further notice.

Travellers to South Korea should reconsider their need to travel due to widespread community transmission.

Travellers to Japan or Italy should exercise caution if travelling to affected areas of the country.

Travellers should note that older adults or travellers with chronic medical conditions are more vulnerable to the virus and should be postponing nonessential travel to any of the destinations above. Before travelling to an affected area, travellers should monitor the latest directives from international health authorities and verify their insurance coverage carefully. Travellers on an essential visit should liaise with their consular authorities, reduce the length to their stay to a minimum, and make contingency plans for evacuation. Travellers should note that lockdown measures could be introduced at a very short notice in areas with sustained number of infections, and if there are any indications that such measures could be introduced, they should leave the location while they still can. All travellers should exercise adequate health measures, including maintaining social distancing, washing hands frequently, avoiding, touching eyes, nose and mouth, and practicing respiratory hygiene; travellers should monitor any flu-like symptoms that could appear up to 14 days after infection.

Significant uptick in confirmed cases and fatalities in Italy

Authorities confirmed new cases of the novel coronavirus (COVID-19) in several regions, bringing the death toll to at least 29, as the number of confirmed infections rose to at least 1,128 across 13 regions, with Lombardy, Veneto and Emilia-Romagna the worst-affected. 11 towns in Lombardy and Veneto regions have been in lockdown since 23 February in order to contain any further spread of the virus.

Public health officials in Iran cancelled classes at schools and universities as well as suspended Friday prayers in Tehran and 22 other cities to try to limit the spread of the outbreak; at least 593 cases of COVID-19 and 43 associated fatalities were recorded nationwide as of 29 February. Restrictions on public gatherings and travel are in place in Qom province, the epicentre of the outbreak, while individuals with suspected and confirmed cases of COVID-19 are subject to domestic travel restrictions and 14-day quarantine procedures nationwide.

Authorities confirmed 571 new COVID-19 cases on 28 February, bringing the total number of infections to 2,337, which included 16 deaths. The worst-affected areas are Daegu and North Gyeongsang province, where “special care zones” were declared in Daegu and Cheongdo, with residents advised to remain indoors to limit the spread of the disease.

Public health officials in Brazil announced the first case of the COVID-19 in a 61-year-old man in São Paulo on 26 February, Mexican health officials confirmed that a 35-year-old man tested positive for the COVID-19 infection in Mexico City on 28 February and Ecuadorian doctors confirmed the country’s first case on 29 February in a 70-year-old resident who recently returned from Spain.

Coronavirus continues to spread within the United States

Centers for Disease Control (CDC) officials in the US announced that public health authorities expect that the outbreak, which has largely been contained among returning travellers and members of their immediate families, will spread. Cases of community spread, unconnected to foreign travel, were reported in California, Oregon and Washington states as of 29 February; travel bans are in place for China and Iran. 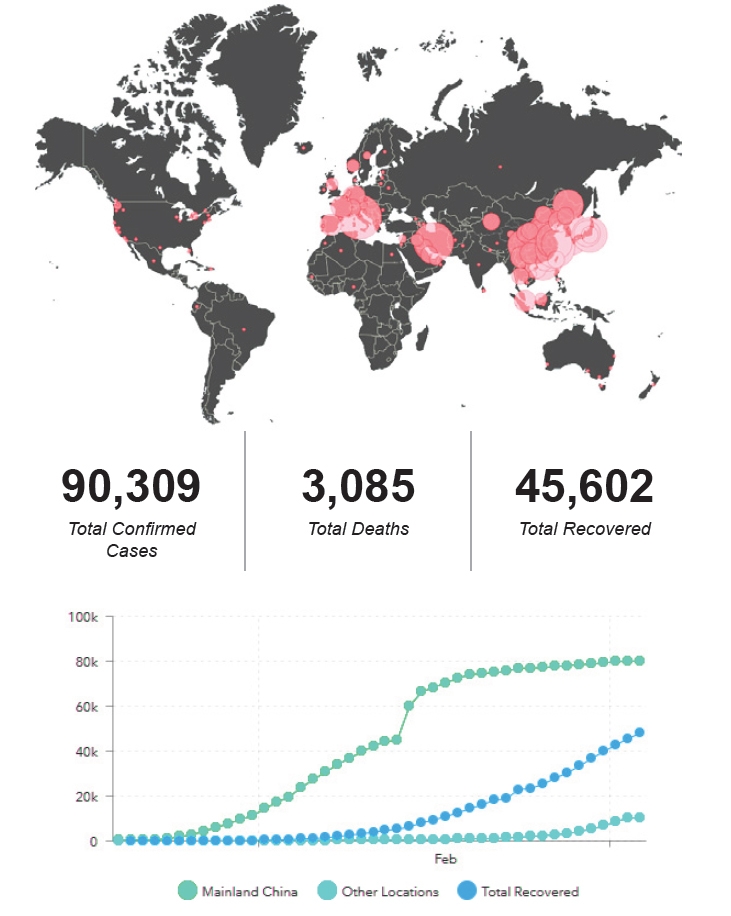